Reshoring – a Rebirth for British Manufacturing? 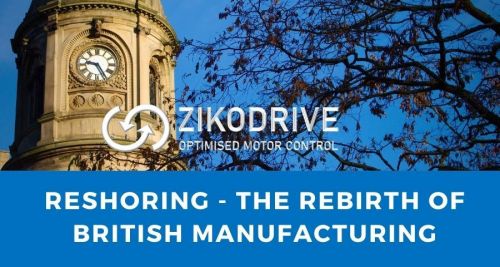 The last 18 months have been exceptionally hard for British manufacturing. Whatever one thinks about more controversial issues such as Brexit, there can be no doubt that they’ve caused significant disruption. Coupled with this, there has been the colossal impact of Covid-19 with the nationwide shutdowns seeing unprecedented falls in GDP and economic activity. To further compound this, those of us working in the electronic supply chains have seen significant problems caused by component shortages in microcontrollers, mosfets and capacitors which have meant having orders that we’re unable to fulfil due to shortages or costly redesigns to replace hard to find components. As a side note, the unregulated market in these components has become a field day for those looking for a quick buck with certain components almost reflecting stocks and shares in the price changes being quoted.

However, beneath all this, there are some positive signs that the rise of reshoring may trigger a rebirth for more advanced British manufacturing, especially in those areas such as West Yorkshire that were hit hard by the decline of manufacturing in the post-war years. So, what’s causing this trend?

The Loss of Manufacturing in the Post-War years

The loss of UK manufacturing was often seen as being caused by heavily unionised workforces driving wages up that then made the costs of manufacturing here in the UK uncompetitive against foreign competition. The foreign competition would typically have either benefitted from increased innovation (Japan often cited as the main example) or much lower labour costs (Eastern Europe and especially China were the two main examples). The twin trends of increased globalisation and rising consumerism drove customer demand for cheaper consumer goods and with the British manufacturing base not able to provide these, the writing was on the wall.

However, in recent times, there have been a number of academics / economists who have argued that significant amount of this manufacturing could now start to come back to the UK. So what’s driving this trend? In part our own experience has shown the value of the internet in enabling smaller companies to get started in industries that would simply have been impossible twenty years ago. In the early stages of growth, a small company such as Zikodrive was at the beginning can use the internet to reach customers that would have been far out of reach before, thereby increasing their potential customer base.

Whereas previously, such customers could only have been reached at expensive trade shows or through sales visits that may be unaffordable to the smallest of startups, now we can deal directly with potential customer’s all around the world – highlighting our products via the website and communicating with them over Zoom or Teams (or any other related tool). This provides smaller firms with a major opportunity that they would not previously have had and therefore increases the number of potential competitors in any given industry.

However, by far the biggest driver of the reshoring trend has been the rise in relatively new manufacturing technology that has reduced the barriers to entry for many firms. Simple examples include 3D printers and CNC machines which enable parts to be built quickly and inexpensively with relatively low waste. However, electronic assembly has seen similar trends. What once required a veritable army of workers to produce can now be produced on relatively inexpensive equipment that’s as cheap to run in the UK as it is anywhere else in the world.

Where this happens, the competitive advantage of firms changes from production cost to innovation and design, something that the UK has historically performed relatively well in. In electronic manufacturing there is now a fairly well established market offering small desktop machines for through hole soldering, pick and placement and reflowing. On top of this, there is a thriving refurbished market for high quality machines that are still fully functional and are still fully supported by qualified technicians.

All of these trends have served to bring the cost of entry for manufacturing down significantly. As with the marketing trends discussed above, this trend has allowed market entrants who would otherwise have had no chance of raising the requisite capital to get started, to develop ideas and simple manufacturing facilities that can operate at very high, industry recognised standards.

A Deeper Appreciation of Economics

A further trend in this area has been the rise in general understanding of economics amongst the population. As these trends have set in and many people have fallen into more precarious employment or unemployment, increased numbers have people have become aware of the importance of where we spend our money and what this can do for the wider economy. This has led to increased movements towards buying local and supporting local companies, especially in the food and hospitality industries. If there was one positive to come out of the miserable experience of the last 12 months, it is hopefully an increased awareness of how choosing where to spend your money can impact the immediate environment in which you live. We certainly hope that this continues.

A Trend Set to Continue?

Our hope is certainly that this trend continues for many months and years to come and there are certainly no immediate reasons to think that it won’t, despite the current issues around component availability and Covid-19.

Despite the challenges of the last few months, there is still enormous potential for boosting innovation and increasing manufacturing capability in the UK. New innovations and companies can help respond to the major crises we face as a country and a planet, creating new technologies to fight climate change, offering opportunities for those who have struggled to get started in life and creating a more inclusive, socially responsible model of capitalism that is innovative and dynamic but without being rapacious and unstable.

There is undoubtedly still a long way to go in ensuring that this becomes a genuine trend but If this can be achieved then the future is certainly bright for the UK!