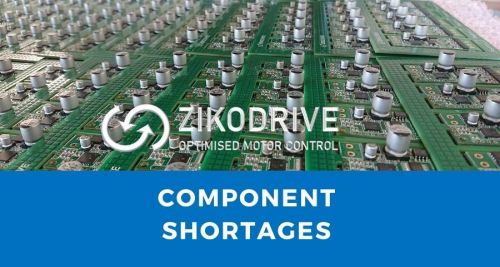 As you may have read in numerous national papers or trade journals, the electronics industry is currently beset by component shortages. This has had a major impact on the supply of components used in many of our controllers and has particularly affected the use of microcontrollers, mosfets and any other silicon based components. The issues are industry wide and have affected a large number of major manufacturers. Those who have highlighted this as an issue include;

Many of the above manufacturers have been so badly affected that they have suspended production and temporarily closed production lines, such is the impact of this shortage. Indeed, the issue has been called “chipageddon” by some news outlets (BBC 2021).

So what’s caused this issue?

In part, as with many other industry problems, it has been caused by Covid-19. As the first waves of lockdowns occurred, the demand for certain chip types plummeted – automotive manufacture being one. At the same time, demand for other chips skyrocketed – those used in PC’s, tablets and related devices were increasingly in demand as more people bought these types of goods to help with working from home. This led manufacturers to switch production lines from certain chips to support manufacture of other chips. As certain parts of the global economy have then opened up, the manufacturers have been unable to cope with the demand and this has resulted in several significant delays.

New production lines take many months – typically 18-24 months – to be able to produce reliable products after being opened up so it is anticipated that supply will be short for some time. On top of this, new technologies such as 5G have created major demand for new types of chips which is meaning that production of previously readily available products are seen as lower priority for many manufacturers.

Equally, the impact of recent trade disruption between China and the US has created a number of legal issues which have led to certain manufacturers stockpiling and/or being unable to access chips that they were previously able to purchase. It is possible that recent political changes may make this less of an issue but how this will be resolved remains to be seen.

We have had to suspend production of certain products – ZD10 and ZDBL15SIN being the two most badly affected – as the lead times being quoted for these devices is currently upwards of a year, with no guarantees being provided. Similarly, some other components being used in our standard products or custom controllers are being quoted at 2 years +. This has caused major problems for our ability to supply controllers to customers in what are already difficult times.

How will this likely be resolved?

Clearly, with such a major issue and the impact it is having on major manufacturers, there is huge amounts of work going into resolving the issue, both from chip manufacturers themselves but also in political circles. Major investment is going into opening up new production facilities and investing in expanding already existing plants in order to be able to cope with demand. Unfortunately, there is very little that can be done beyond this as it is simply a case of waiting for orders to be processed and shipped out.

We remain hopeful that many of the supply issues will be resolved in the next 6-12 months, at least on certain parts. In the mean time, we will continue to do everything possible to mitigate the impact of this on all our customers. In return, we ask that, if you do have a project or potential order in the next few months, to get in touch with us as early as possible so that we can try and place orders early and/or work out a solution to deal with a particular component shortage that will work for all parties.

I’m a Zikodrive customer, how will this affect me and what can be done to reduce its impact?

As an existing customer we will have already contacted you to discuss the ways in which this is affecting the products that you currently order. If this has had a major impact on our ability to supply the product we will have advised on potential solutions. Our design team are working hard on the development of a flexible range of controllers that can use multiple types of microcontrollers and still work adequately. As you can imagine, this takes time to get right but we are hopeful that the first of this range will launch in the next few months. On top of this, we have purchased volumes of components we are able to source in order to reduce the probability of a complete shutdown of operations.

We would encourage all customers, wherever possible, to place orders as early as they possibly can to reduce the probability of shortfalls and to enable us to source components as early as we can. We appreciate that this is not always possible but we would actively encourage all customers to get in touch as early as possible and we can work out a solution that balances the risks for all concerned. Whilst we are happy to purchase some components in on a predictive basis, there is obviously a limit to the amount of stock we can hold with an uncertain order book.

There is no doubt that this issue is part of a perfect storm of supply issues, unpredictable demand and wider trade disruption caused by the impact of Covid-19, certain geopolitical factors and, in some cases, environmental factors such as the recent drought in Taiwan. As with much of what has happened in the last 12 months we are simply having to find ways of dealing with these challenges as they present themselves in order to try and find the fairest and most realistic solution for our customers, ourselves and our suppliers.

If you are looking at purchasing a controller or are considering one for a particular project in the next few months we would reiterate the importance of getting in touch with us as soon as possible so that we can work out a solution that works for everyone.